Node Storage concerns how the bounds (bounding box) of nodes are stored during the execution of the DiagramRenderer#draw method. This is a performance feature to avoid the inefficiency of continually re-computing the bounds of nodes during a single diagram rendering pass. The principle behind the Node Storage feature is that the bounding box for a node should only be computed once for a given diagram rendering pass. Because bounding boxes are used in many calculations for node and edge placement, it is necessary to cache the computed value to avoid repeatedly recomputing it.

The following class diagram illustrates how the design is realized with the illustration of a NoteNode (a node that represents a note on a UML diagram). 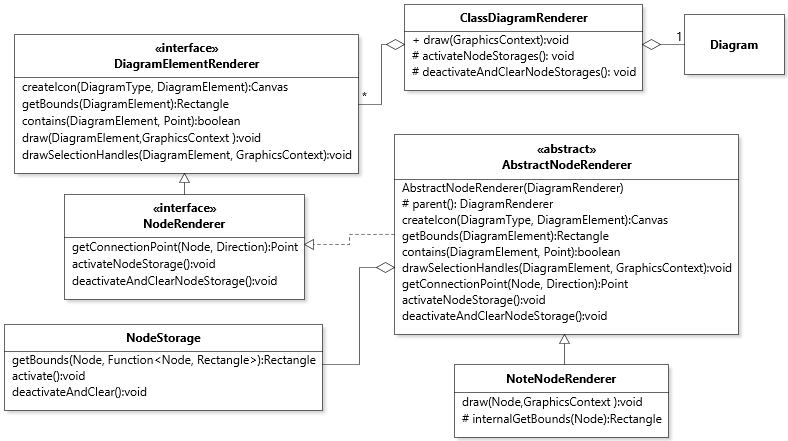 The following sequence diagram illustrates a scenario where a diagram that contains a single NoteNode is drawn.

The NodeStorage class is responsible for caching the bounds of different nodes, and computing these bounds for any node not in the cache. This computation requires specialized algorithms to compute the bounds of different nodes. To make it possible to reuse the NodeStorage class for all different types of nodes, its method getBounds takes as second argument a bounds calculator function object of type Function<Node, Rectangle>. The concrete bounds calculators are implemented as protected methods of the NodeRenderer subclasses that implement the abstract method AbstractNodeRenderer#internalGetBounds. For example, in the class diagram above, NoteNodeRenderer implements internalGetBounds with the code to compute the bounds of NodeNodes. With this design in place, the implementation of AbstractNodeRenderer#getBounds is greatly simplified as:

Here, the expression this::internalGetBounds is a reference to method internalGetBounds of the NodeRenderer object upon which getBounds gets called. As illustrated in the sequence diagram, when there is a cache miss, this method will be the one called to compute the node’s bounds.